In light of recent violent acts against women around the world, we think it is only fitting that we tell you a little bit about being a woman traveler in Vietnam.  We feel that it is important to understand the rules of the game when visiting a new country because women travelers may face unique challenges.  Some major issues that concern women travelers are unwelcome attention from men, physical assault, or varying perceptions of gender roles.  Fortunately, Vietnam is a relatively safe country for women travelers as the incidence rate of violent crime is quite low.  Unlike other parts of the world, women are seldom the victims of sleazy gazes or derogatory advances.  Although there is inherent conservatism in the Vietnamese culture, women are well respected in society.

That being said, there are certain things that female travelers should keep in mind when traveling in Vietnam.  Aside from the very obvious points such as ‘don’t walk down dark alleys alone‘ and ‘don’t drink too much and let your guard down’, here are some Vietnam-specific things you should take into consideration:

1. Clothing – Although many female travellers choose to be less covered up when visiting Vietnam, it is best to be more respectfully dressed.  Vietnam is by no means a place where women have to be covered from head to toe.  In fact, local women can be quite stylish!  However, local residents are usually not skimpily dressed and travellers should follow suit.  As we said earlier, aggression or assault from men is not common here and we are not implying that a woman’s clothing choices should provoke any ill behaviour upon her but making smart clothing choices is the easiest way to not attract unwanted attention.  Additionally, women should be particularly respectful with clothing choices when visiting a pagoda or temple.  At these places of worship, short shorts, tiny skirts, low cut tops or bare shoulders are not considered appropriate attire.

2. Personal belongings – We have said this before in this blog and here we reiterate.  Please be careful of your purses, phones and jewelry.  Thieves will go to any length to snatch purses or other valuable items.  We have read all too many stories where thieves on motorcycles have tried to grab a woman’s purse and dragged the poor woman until the purse was freed from her.  If a situation such as this arises and the perpetrator is stronger than you, the last thing you want is to be physically hurt.

3. Behaviour – Vietnam is a rapidly developing country and western trends are quickly influencing both pop culture and everyday culture.  Many youngsters are seen holding hands and being affectionate.  Although holding hands is fine, other public displays of affection are not deemed respectful.  It is not advisable to kiss in public.

4. Personal Questions – In Vietnam, it is quite common to ask about the marital status of a woman.  There is also a fair chance that some lifestyle choices may not be fully understood or supported.  Many women travelers have reported that they wore a wedding band or said that they were married simply to avoid these questions.  The locals’ exposure to tourists has grown substantially over the past few years but it is possible that you will encounter some people who do not agree or understand why a woman is unmarried past a certain age or is in a common law relationship.

Another question you may encounter often is about your age.  It is very common to establish your age in comparison to the the person asking because it denotes how they address you in the Vietnamese language.  For a westerner, this notion can be a bit strange because one never asks a woman’s age unless you’ve reached a certain comfort level!  Though these questions may come across as offensive, it is not the intention.

5. Transportation – The motorcycle is definitely the vehicle of choice in Vietnam.  One form of public transportation here is the ‘xe om’, which literally means ‘hugging bike’.  Many men around the city will offer rides to tourists on the back of their motorbike for the fraction of the cost of a regular taxi.  The xe om is fast, cheap and more agile in the crazy city traffic.  Many tourists, including women, take the xe om without consequence.  Some women may have a difficult time getting on a bike with a stranger but for the most part they are safe.  The etiquette when on the bike is that if you are a woman, you can put your hands around the driver’s waist (but you may certainly ask first if it makes you feel more comfortable).  Men are to put their hands on the driver’s shoulder.  At night, however, we highly advise women to take taxis rather than xe om mainly because of the personal safety factor.  An added reason is that drinking and driving is becoming an increasing concern in Vietnam so it is more likely that taxi drivers will drive responsibly since they are actually ‘on duty’. 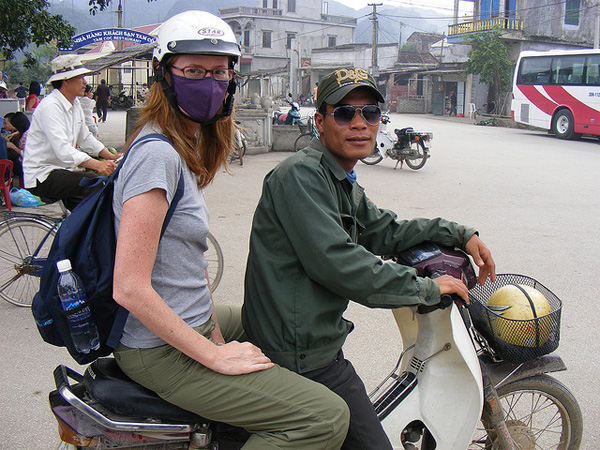