Tây Ninh is a provincial city in southwestern Vietnam. It is the capital of Tây Ninh Province, which encompasses the town and much of the surrounding farmland. Tây Ninh is approximately 90 km to the northwest of Ho Chi Minh City, Vietnam’s largest city. As of 2013, the city had a population of 153,537, and a total area of 140 km².

The city is most famous for being the home of the Cao Đài religion, an indigenous Vietnamese faith that includes the teachings of the major world religions. The Cao Đài religion’s Holy See, built between 1933 and 1955, is located around 5 km to the east of Tây Ninh’s city centre. Tay Ninh is also famous for its extravagant culinary culture that can mesmerized any tourist.

Trang Bang soup cake
Coming to Tay Ninh, you should not missed the one and only Trang Bang soup cake in the town of Trang Bang. There are many places try to mimic this special dish, but only in its origin that you can truly appreciate the flavorful and irresistible soup cake. The ingredients consist of the soup made out of pork bones, the pork sausage, the rice cake, herbs like cilantro, green onions, and a few more slice of meat. 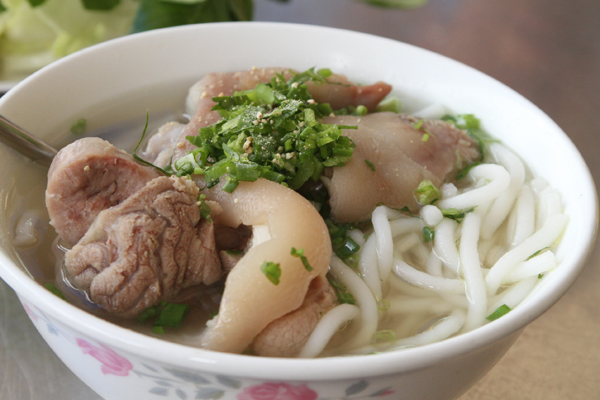 The cake is made out of the best rice in the region. The rice has a unique smell and also silky soft. The broth to make the soup is also noticeable. Additional to the soup cake are the herbs like sprouts, chilli, lemon, and many other type of vegetables. 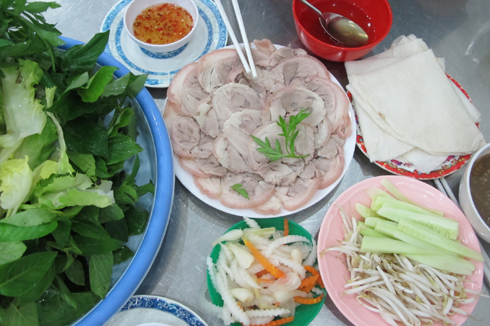 The rice paper, which is a double-layer rice paper, also has to be burnt on a small coal fire. The secret is not to over burnt the rice paper but to made the color from clear to white. After the burnt, the rice paper has to be left outside for one night before use. Because of the frost, the crunchy rice paper will be more flexible, suitable for making an egg rolls.

The meat to make the rolls is bacon, but with less fat than the normal one. The sauce is also a very important part of this dish. The rolls, from the outside in, are made of: rice paper, the herbs, some other vegetables, and than the meat. The rice paper is soft, but is not easily tear apart. The rolls are a part of Tay Ninh that you must not miss.

Mixed rice paper
This is one of the most common, and also most loved dish by not only the locals but also everywhere in Vietnam. 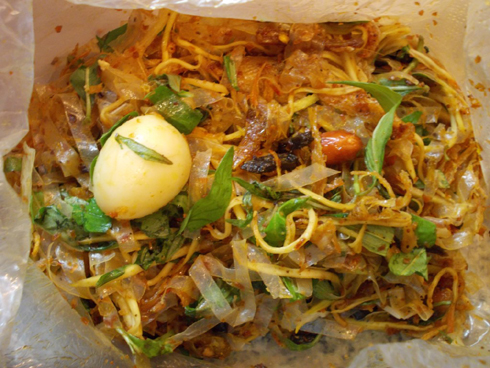 The main ingridients are sliced rice paper, Tay Ninh shrimp salt, mangoes, chilli sauce, cilantro, beef jerky, oil, peanuts, quail eggs, and many others. All are mixed together to create a unique dish that cannot be found anywhere on Earth.

Tamarind rice paper
The tamarind is famous for the sourness and sweetness at the same time. The combination consists of tamarind sauce, fried onions, peanuts and chilli salt. For the convenient purposes, the locals put the ingredients into separate packs. All you need to do is to mix everything together. 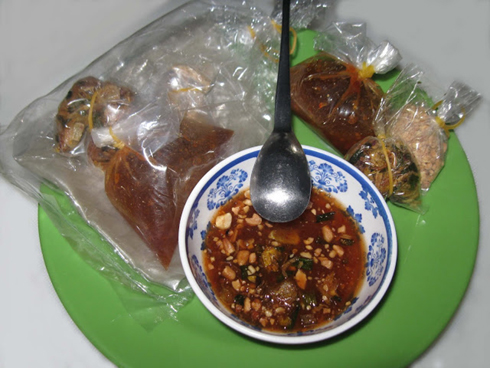 The tamarind rice paper is the sundried rice paper cut into square pieces. Combining the salt, the chilli, the fried onions, and last but not least, the tamarind sauce and dropping them inside the rice paper, you will have a cool snack that you cannot stop eating. Depends on the preferences, there are many type of sauces that follow, but the best is still the tamarind. The sour of the tamarind, the spicy of chili, the saltiness of the rice paper, and the fat of peanuts are combined to create the best snack in the world.

Shrimp salt
There are many peculiar things in Tay Ninh. You can try the best soup cake in Vietnam, or the coolest snack in the world. However, there is something else about Tay Ninh that all the food lovers must know. It is the shrimp salt that makes Tay Ninh so special. 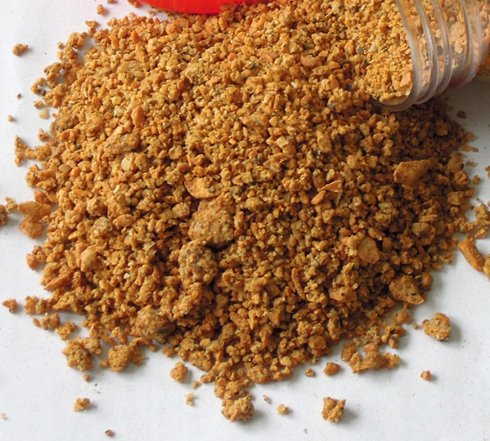 Tay Ninh doesn’t lie next to the sea, yet it has the most flavorful dip sauce in the world. The salt is the best thing about the land of wind and sun. The main ingridients of the salt are shrimp and salt, and the extraordinary skill of Tay Ninh people. There are also many other spices such as meat, garlic, chilli, seasoning, and many more. All components will be put into one place to fry. The salt is adored by fruit lovers in Vietnam because basically any kind of fruit can be dipped into shrimp salt, which is salty, spicy, yet mixes perfectly with the sour of some fruits. The salt is difficult to make so the price for its is a bit higher than the normal salt. But salt in Vietnam is fairly cheap. The wonderful smell of the salt is irresistible when placed it next to a dish of fruit.

There are many types of fruit that can go along with the salt. Mango, plumb, guava, watermelon, and many more are destined to be eaten along with the salt. In addition to that, the salt is also served along the mixed rice paper, which is loved by many people across Vietnam.

Black Virgin Mountain snails
Black Virgin Mountain (Vietnamese: Núi Bà Đen meaning “Black Lady Mountain) is a mountain in the Tay Ninh Province of Vietnam. To the Vietnamese the mountain is the center of a myth about Bà Đen, a local deity of Khmer origin. During the Vietnam War the area around the mountain was very active battleground. After the war the mountain turned from a battleground to being famous for the its beautiful temples and theme park. The mountain is famed for its beautiful temples and theme park. 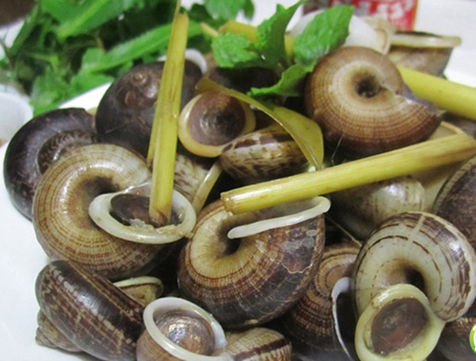 The Mountain is not only offering the beautiful landscape but also a long list of cuisines. One them is the Black Virgin Mountain snail. The shape of the mountain snail is similar to the river snail’s shape. According to the locals, the snail is not only delicious but can also relieve pains. After caught the snails, only need to wash it from dirt and don’t have to put them into any washing chemical. The snail can be turned into many type of dishes such as grilled, steamed with lemongrass, fried with tamarind, or sautéed with garlic.

The locals usually boiled or steamed the snails with lemongrass or ginger to retain the special snails flavor. The snail’s meat is tough, but it is the toughness in every bite that makes this dish so special. The snail also has many dips that go along with it. You can either use fish sauce, shrimp sauce, or any sauce that you like. Tay Ninh people also have one more special dish of the snail. After caught the snails, they will let them continue to grow by feeding them coconut meat, so that when the snails are cooked, they will have the fat from the coconut. The meat is sweet, combined with the peculiar flavors all kind of herbs, will make you come back for more.

Black Virgin Mountain lizards
Another dish from the Mountain, the grilled lizard is one of the best dish from the region. The lizards are distinguished from the geckos from the white stripes on their backs, their tails is brown-ish, and they are relatively small. Unlike the geckos, the mountain lizards only eat banana, Southern herb leaves, and because of that, their meat is solid and nutritious. 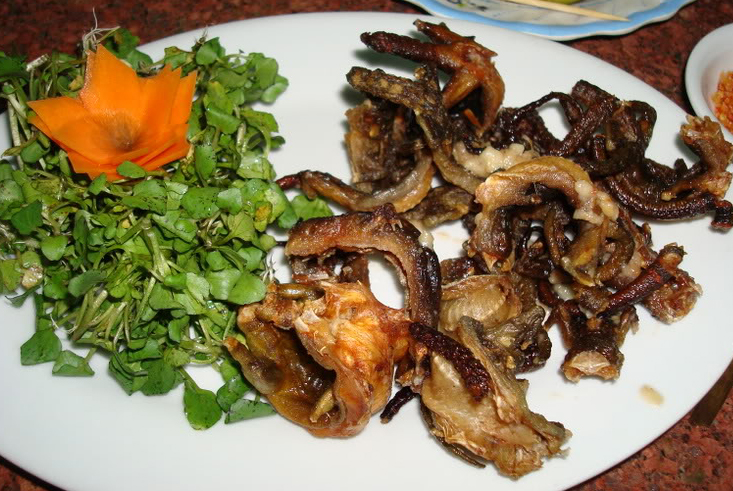 The lizard can be made into types of dishes such as chopped, fried with green pepper and eat with rice paper. The best is the deep fried lizards and eat with lettuce, tomato, cucumber, herbs, and tamarind sauce.

Grapfruit rolls
The grapefruit rolls are used for both vegans and vegetarians. As one the Tay Ninh finest dish, the rolls are sour, salty, sweet, spicy, all together in one bite. 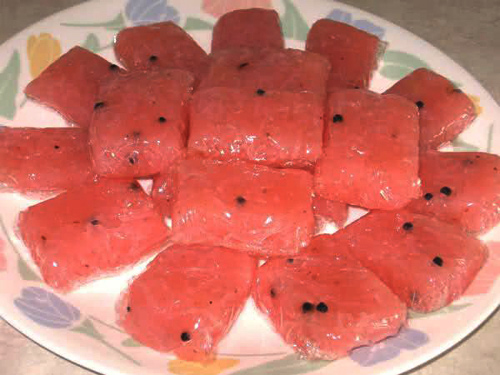 The Tay Ninh people are indeed creative to be able removed the bitterness of the grapefruit skin and turn it into a wonderful dish. Many who try this dish for the first time are mesmerized by the color of the rolls, and they are even more surprise to find out what made this. The main ingredients are the grapefruit skin, sliced raw papaya, star fruit, killer chili, pepper, Erythrina orientalis leaves, banana leaves…

A perfect roll has a perfect color: pink with a little red. The rolls are not too tough, yet not too soft at the same time. The taste are salty, sour, sweet, spicy, all in one.