An Giang Province is located to the west of the Mekong Delta between the Tien and Hau rivers and shares a 100km border with Cambodia in the north – west. It also shares border with Dong Thap Province in the east, Cantho City in the south – east, and Kien Giang Province in the south – west. An Giang has two main types of topography: midland areas and low mountains. The low mountains is Bay Nui (Seven Mountains) in Tinh Bien and Tri Ton districts. Vinh Te Tunnel runs along with the province’s border in the west, which connects from Chau Doc to Ha Tien.

Trà Sư Forest
Location: Tra Su Forest is located in Vinh Trung Commune, Tinh Bien District, An Giang Province.
Characteristics: Coming to Tra Su Forest, people will have a chance to enjoy precious moments living in harmony with nature as well as the wholesome atmosphere.
The forest has been restored since 1983 with a current extension area of 700 hectares. This ecological spot is the habitat of many genera of water birds (mostly storks), colonies of bats and various rare animal and bird species. Especially tourists will be flabbergasted by small houses on stilts with rudimentary bamboo ceilings that are firmly tightened to cajuput trees, making an unusual existence in the quiet ambience of the forest. They are actually restoration work of a provincial-level revolutionary base of the An Giang people and soldiers in the glorious struggle against the US imperialists. Standing on a 10m high watch tower in the midst of the forest, tourists can enjoy a panorama of the vast greenery spotted with the white of storks below. Turtles, snakes, as well as other reptiles and freshwater fishes are also abundant in the canals.
Endowed with peace and tranquility, Tra Su Forest will certainly become a unique and attractive destination for tourists who love the beauty of nature.

Ba Chua Xu Temple was built in 1820 on Sam Mountain. According to a legend, in the early 1800s villagers found a statue of a lady dating to the 6th century in the forest. They built a temple in her honour, hoping that she would bring them better crops and better lives. This is why the marble statue of Ba Chua Xu, meaning “country lady,” is worshipped. Ba Chua Xu Festival is organized annually at the end of the 4th lunar month; worshippers touch her statue and ask for her protection and benediction. 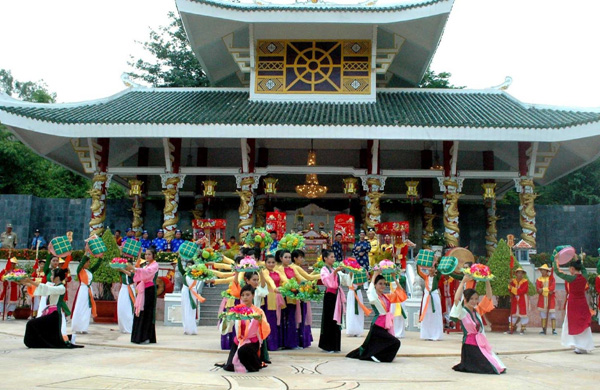 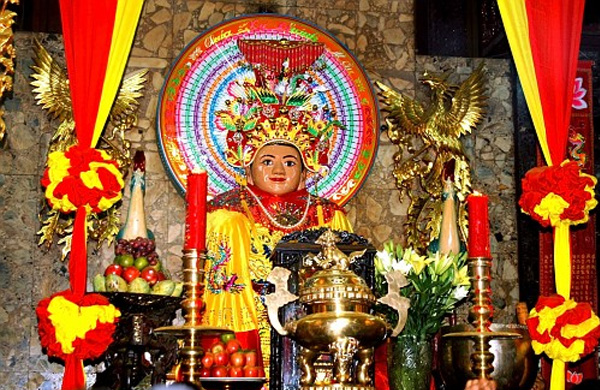 Thoai Ngoc Hau Tomb is located in front of Ba Chua Xu Temple, that is the biggest monument at the foot of Sam Mountain, 5-km southwest of Chau Doc. Thoai Ngoc Hau (1761–1829), originally named Nguyen Van Thoai, was the first man from this area to exploit the virgin soil, establish living settlements, and dig Vinh Te and Thoai Ha channels. He was buried there along with his two wives and a temple in his honor was built in the 1930s. 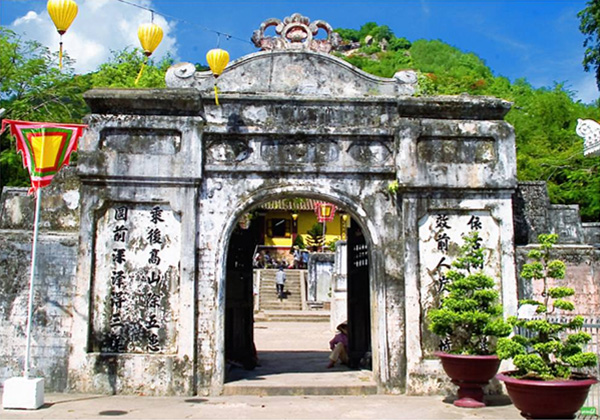 Sam mountain
Location: Vinh Te Commune, 6km west of Chau Doc Town, An Giang Province. Characteristics: The 230m high mountain with beautiful landscapes and many historic remains. From Long Xuyen, one has to travel almost 60km to get to Sam Mountain which lies west of Chau Doc Town, at approximately 2km from the frontier between Vietnam and Cambodia. The 230m high mountain does not only offer beautiful landscapes, but it is also where many historic remains deeply loved by the inhabitants of Nam Bo plain are located. Ba Chua Xu Temple, Tay An Pagoda, Thoai Ngoc Hau Tomb, Tao Ngo Garden, and Bach Van Hill are among the famous sites to visit near Sam Mountain. 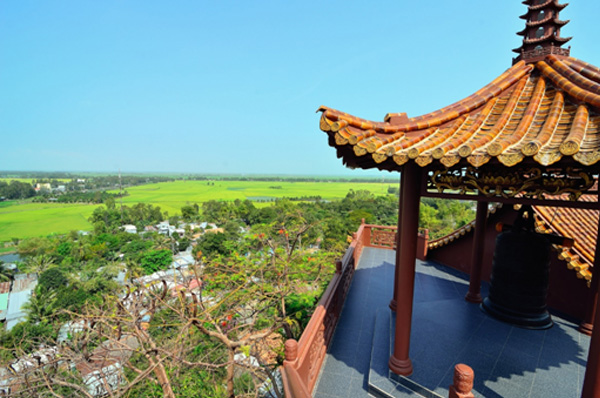 Chau Doc Floating Village
Coming to Chau Doc, you will have a chance to discover the charming attraction in a three-hour tour. This tour will take you on the floating market, the floating village offshore, a Cham village across the river, and perhaps a peek at the Kinh Vinh Te, the canal that leads south to Ha Tien.

Being busiest at 7am, the floating market is about 10 minutes downstream from the central market. In the morning, many boats will be fully loaded up with goods, especially fruit to prepare for a market day. Boats head off to pick up fruit in Sa Dec or Can Tho every few days, but there’s always plenty of business in the early hours.

Another stop you should not miss is the floating village, which are group of houses with the roof and wall made of aluminum. Embedded inside are lots of huge, netted ‘fish farms,’ where hundreds and hundreds of ca vo dem fish await canh chua bowls; some visitor can get shipped downriver to Can Tho and beyond. Note the huge moored wooden boats, which flood their lower decks to keep the fish alive during the trip. 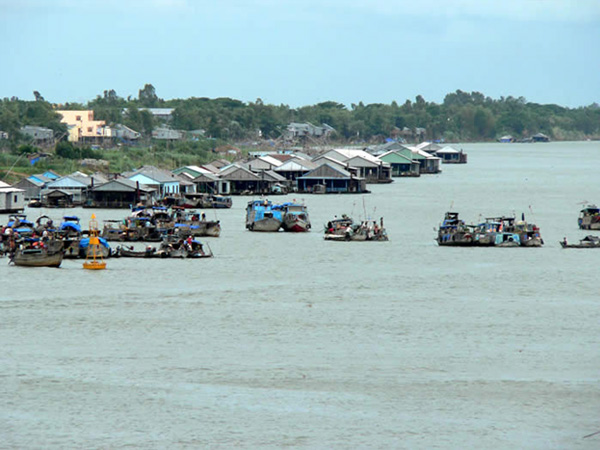 Bung Binh Thien – a heavenly natural lake in An Giang province
Named as the Peaceful Lake of Heaven, Binh Binh Thien is a blue – and – water lake naturally formed in An Giang Province area. The lake is tranquil all year long that reflecting cluster of clouds and enticing passers-by to stop and contemplate the primitive attraction.

Bung Binh Thien is located in An Phu District, in the Mekong Delta province of An Giang, connecting tree communes including Khanh Binh, Nhon Hoi and Quoc Thai, and adjoining Binh Di River and Hau River. This beautiful lake is being constructed to become an eco-tourist area.

Bung Binh Thien is a place of tranquility where visitors can stay away from the stresses of city life and discover the poetic landscapes of the area, with water-lilies and lotus swaying in the wind on the lake, and the bustle of creatures such as fish, shrimp, snakes and turtles under water. 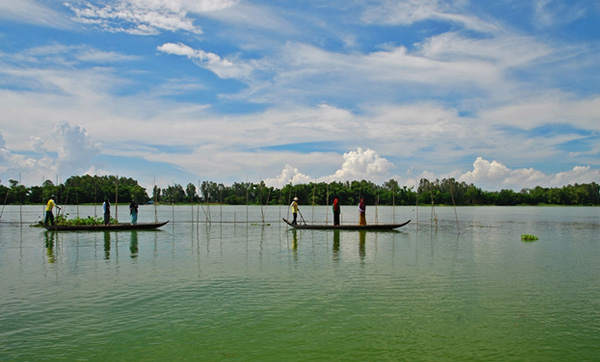 Located about 50km from Chau Doc central, Co To Mountain is belonged to Nui To Commune, Tri Ton District. The mountain is about 5,800m long, 3,700m wide and rises to 614m above sea level.

Living on the mountain there has about more than 30 families that mostly are farmers. They grow fruit trees such as mangoes, jackfruits, durians, bananas, papayas, pineapples and avocadoes. Over the past several years, residents have also cultivated aquilegias for agar wood. Several families also sell goods such as footwear, headwear, food, drinks and candles to tourists.

The mountain has many natural forests where become interesting places for visitors. There are some pagodas and temple, which are located on the mountain that visitors can stay at night if they do not want to leave the mountain too late or if they want to stay longer for more visits the next day. In addition, they can also stay overnight at simple guesthouses operated by residents. 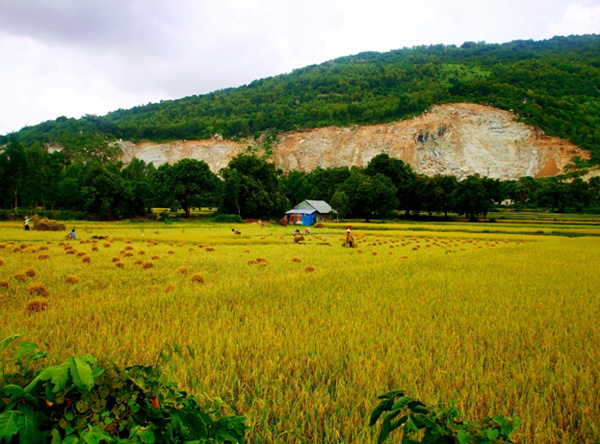 Tức Dụp Hill
Location: Tuc Dup Hill located in Tri Ton District, belongs to Co To Mountain, An Giang Province.
Characteristics: Even though Tuc Dup Hill is only 300m high, it owns an obstacle and dangerous geography with rough cliffs forming caves getting though each other like a bee hive. For these distinctive characteristics together with brave fighting will and wisdom of An Giang people, Tuc Dup became a famous fighting base in the time being against American. During 128 days, the enemy who had a very powerful military force such as fighting jets, artillery and infantry did not defeat our determined fighting will.

In the result, American was defeated. Thus, a terrible name was heard “2 million – dollar hill” (the sum of money that American paid for bullets and bombs). Then, peace was set up. The Tuc Dup Hill, which had no trees or phenomena of life because of the war’s impact, becomes vital with trees and becomes a historic site recognized and classified by academic ministry. Being romantic and next to splendid Co To Mountain, Tuc Dup Hill is visited by tourists on special holidays so that they can see the war remains, enjoy fresh air and admire ranging mountains. Visitors can also visit C.6 tunnel, cave for medical ward of military, the youth tunnel and the town hall… It deserves to be an ideal amusing place as visiting people prized. 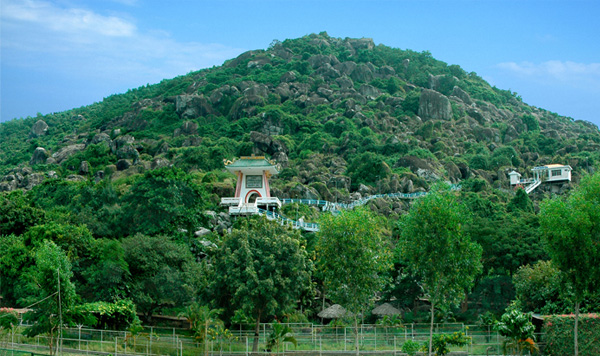 Tourist attractions in Tịnh Biên An Giang
Cam Mountain
Cam Mountain known as Thien Cam Son is considered a beautiful silk brocade. It is the highest and most grandiose mountain in the That Son area in the triangle of Tinh Bien-Nha Bang-Tri Ton in An Hao Commune, Tinh Bien District of An Giang Province. The landscape in this area charms like a painting that fascinates every visitor.

Cam Mountain is a pilgrimage and tourist destination for people both from home and abroad. According to An Giang Tourism, every year over 1.2 million people visit this area and the number of visitors is largest during the spring festival from January to June of the lunar calendar. 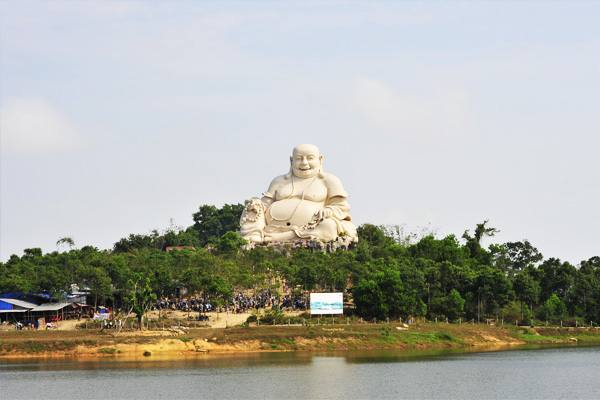 The statue of Mitreya on Cam Son Mountain, the highest statue of its kind in Southeast Asia.