A popular weekend escape from HCMC, Vung Tau rocks at weekends when beach-starved locals and expats descend in numbers, but it is relatively quiet during the week. The city enjoys a spectacular location on a peninsula, with ocean on three sides, and the light and sea air makes it a refreshing break from sultry Saigon.

Oil is big business here, so the horizon is regularly dotted with oil tankers, and petro dollars dominate the economy, inflating prices considerably.

But that is not all in Vung Tau. Religion is also an important part here. Here are the largest, holiest pagodas in Vung Tau.

Thích Ca Phật Đài
Thích Ca Phật Đài (Platform of Shakyamuni Buddha) is a notable Theravada Buddhist temple in the coastal city of Vung Tau in southern Vietnam. It lies to the northwest of the Lớn (Big) mountain and was built between 1961 and 1963 when it was opened.

It is set on a plot of around five hectares, with a Zen Buddhist monastery at the foot of the plot and the Thích Ca Phật Đài at the top. The Zen monastery is a small brick temple built by a government official from Vung Tau in 1957. In 1961, the Buddhist association organised for a renovation of the monastery and decided to build the Thích Ca Phật Đài further up the mountain. Additional lodgings were built to cater to Buddhist pilgrims who come and visit the site. 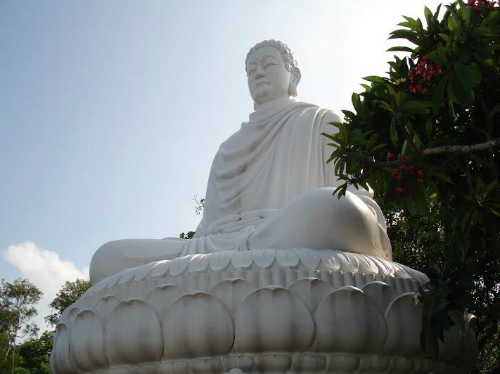 (The main statue of Gautama Buddha in Thích Ca Phật Đài Buddhist temple. Photo: Panoramio)
This pagoda exists exclusively for religious worship, unique in its white cement construction of the giant statue of Thich Ca Buddha sitting on a large lotus blossom. The grounds are dense with foliage, resembling a jungle and heavily populated by birds. The white colour of the statue and the stupa contrasts the blue and green background of the surrounding sky and forest. The site has become a major tourist location in the city as well as a tourist lookout.
In addition, the pagoda also has a 17m-high Blessing tower, inside the tower, there is a yellow box containing 13 Blessing spheres of the true practitioners. Under the tower are four peaks, which mean that the ground is where the Buddha was born.

Chùa Quan Thế Âm Bồ Tát (The Pagoda of Avalokitesvara Bodhisattva)
A small pagoda located on Tran Phu Street – Vung Tau. In front of the pagoda is the Strawberry Beach whispers wave. A special feature of the pagoda is the 16m high white statue of Guanyin standing on a lotus with a kindly and virtuous face and the Cam Lo pot in the hand looking to the sea. The pagoda is one of the most famous destinations for many pilgrimages to this beautiful city. 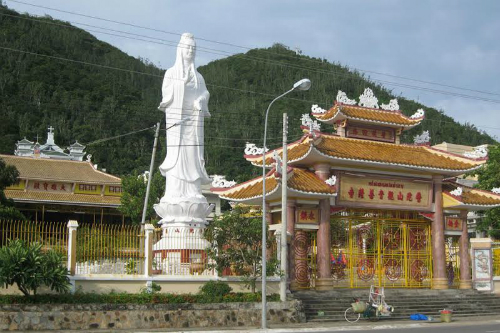 (With the advantage is that the pagoda is facing the sea, creating a beautiful scene, many tourists come to the pagoda for peace in the soul and to witness the beauty of nature. Photo Vietnamtourism)
Behind the pagoda is the mountain, in front is the sea, and because of that, the pagoda is always an attraction for the holidays and monthly full moon days. Coming to Vung Tau in the spring, travelers should check pay the pagoda a visit, to admire the beautiful scenery and explore the traditional culture of this place.

Niết Bàn Tịnh Xá (Nirvana Vihara)
Situated on the slopes of Mount Small on Halong road, Nirvana Vihara Pagoda is one of the most beautiful Vung Tau where the traditional architecture and the modern combine harmoniously. It is also known as the Buddhist Pagoda because of the 12 m long Nirvana Buddha statue located in the main hall of the pagoda, placed on the 2.5 m high altar. The outer surface of the altar is the image of His disciples witnessed Buddha attained the Nirvana. 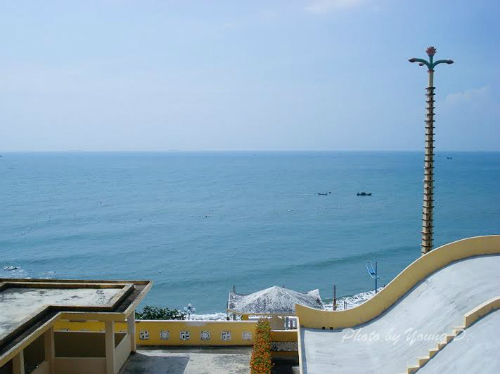 (Standing on the roof of Nirvana Vihara, tourists can watch both the mountains and the vast sea of Vung Tau. Photo: Panoramio)
Viewing the open and pure space, facing the vast ocean, and surrounded by woods, from the roof of the pagoda, visitors will admire the blue sea of Vung Tau with boats on the far side of the horizon.

Linh Sơn cổ tự (Epigraphic of Linh Son)
Located on Hoang Hoa Tham Street in the middle of Vung Tau downtown, the pagoda doesn’t have massive scale, but Linh Son Pagoda is the oldest pagoda in Vung Tau area. Main Hall of the pagoda worships a 1.2 m high Buddha statue made out of stone, with carved gold on the outside. The details of the statue were created meticulously made the statue lively than ever. Based on the way the statue was crafted, the origin of the statue was 1,600 years ago, back in the days of the Ancient Champa. 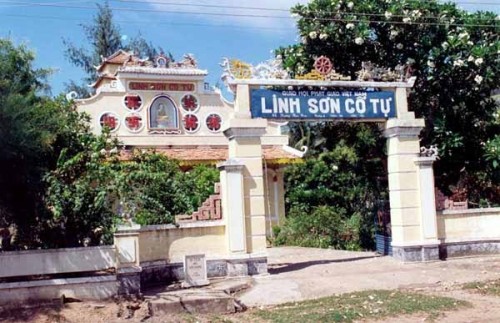 Visit the temple on weekdays, visitors are free to fall into the peaceful and quiet world to get rid of all the troubles and worries of the daily life. Not only that the visitors can have their stressed relieved, visitors can also study the architecture of the ancient pagoda.

Thiền viện Chơn Không (Monastery Chon Khong)
Monastery, built in 1969, is located at an altitude of 80 meters on the slopes of Big Mountain, Vung Tau.The temple’s main infrastructure such as the Main Tower, the Main Hall, bell tower, the meditation hall, the nuns’ hall and the guest house is highlighted by the majestic mountain backgrounds. 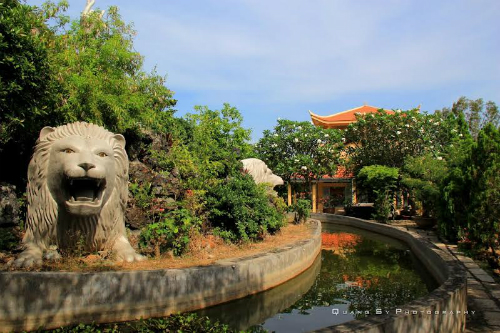 (Part of the Chơn Không Monastery. Photo: Panoramio.)
In order to reach the monastery, tourists have to climb on a slope. The two sides of the road are trees which theirs shade cover the way to the top. The entrance is located midway on ramps. Passing the gates, tourists now can see the Main Hall appears far away.

With the quiet space for meditation blend with the magnificent nature, the scene in Monastery Trúc Lâm Chân Nguyên can mesmerize anyone step foot into this majestic and poetic heaven on earth. This is where the soul can reach serenity and true peace and all of that can mix with the blue of the sea and the sky, with the green of the forest behind.

Highlighted in green of the mountains is the Main Hall was built under the mountains. Behind the pagoda are rocks in many shapes such as snakes, tortoise… in the traditional colors of Buddhism. 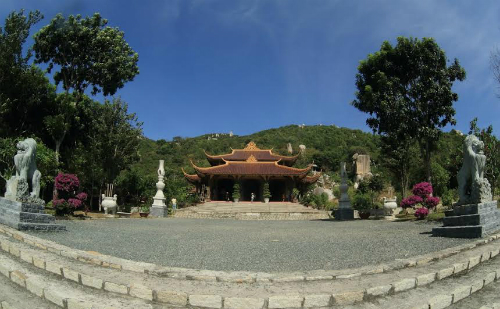 (The Monastery is always a pilgrimage location for the Vietnamses in the early days of the year. Photo: Panoramio)
A special feature of the pagoda is that there are usually hundreds of monkeys gather around the area of the pagoda. So the pagoda is also known as the Monkey Pagoda. Travelers often bring fruit, bananas, food for monkeys to the temple so the monkeys are quite friendly.