Rice is an integral part of life in Vietnam. Vietnam is an agricultural country with eight out of ten Vietnamese living in rural areas and making their living by growing rice. Many Vietnamese people say their country looks like two rice baskets placed at two ends of a pole. 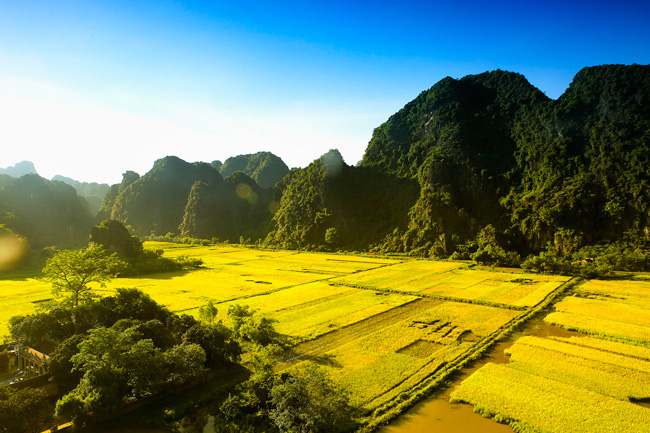 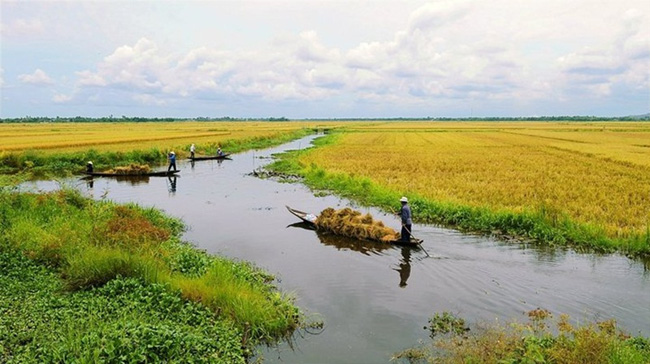 Rice is a staple food for half the world’s population and its cultivation is dated back some 7,000 years ago in Southeast Asia. It is a symbol and also part of ceremonies and offerings. It’s one of the most important food crops in the world and an important part of Asian culture.

There are thousands of rice varieties. Rice is a cereal grain related to oats, rye and wheat. It comes in white, brown, red, black or amber. Its grains can be either short or long, and thick or thin. Rice mainly grows in flooded fields (it needs a constant supply of water) and is called lowland rice. In countries where there is plenty of rainfall, rice may be raised on hills and is called upland rice.

Lowland rice, known as wet rice, is the most common species in Southeast Asia which can be planted in two or three crops a year. Seedlings are raised in nursery beds and transplanted after 25-50 days to flooded fields surrounded by soil-raised border. The paddy stem is submerged in two to six inches of water and the seedlings placed in rows approximately a foot apart.

When the leaves of the rice stalks start to turn yellow the paddies are drained and dried in preparation for the harvest. Vietnamese farmers reap rice by using sickles to cut the stalks. Then they tie the stalks together and dry them.

Threshing separates the grain from the rest of the plant. Sometimes it is done mechanically and sometimes people or animals trample the sheaves. After threshing the rice is ready for milling. If the rice is not completely dry it is often spread out on communal yards or highways to dry in the sun. Rice dryers are widely usued in some regions now. Milling removes the husk from the kernel. Sometimes the process also strips off the bran layer which contains most of the nutrients. Brown rice still has its bran coat.

Nothing is wasted in rice processing. It can be turned into everything from paper to pudding. It’s steamed, puffed and flaked. It can be used to make noodles, wine, cosmetics and cooking oil. While the kernels are eaten, the stalks are made into straw and used for making sandals, hats, baskets, ropes, brooms and thatched roofs. The hulls provide fuel and fertilizer.

Vietnam’s major breakthrough in agriculture came in 1989 when the country had a record output of 18.9 million tonnes of food in term of paddy while annual production could not exceed 17 million tonnes in the 1981-1985period.

The country’s agriculture, especially rice production, saw a strong and fast growth in the 1990-1999 period. From a country facing chronical food shortage, Vietnam has over the past 11 years become the world’s second largest rice exporter after ensuring adequate supply for domestic consumption. Rural people’s life has constantly improved. The fragrance of Vietnamese rice has actually spread across kitchens of many homes in foreign countries. (987)