Today, there are “Quan Ho dai”, “New Quan Ho”, “the renovated Quan Ho”. This shows that there may be some kinds of Quan Ho that are not real Quan Ho. Thus, from what epoch has the tradition of Quan Ho dated? 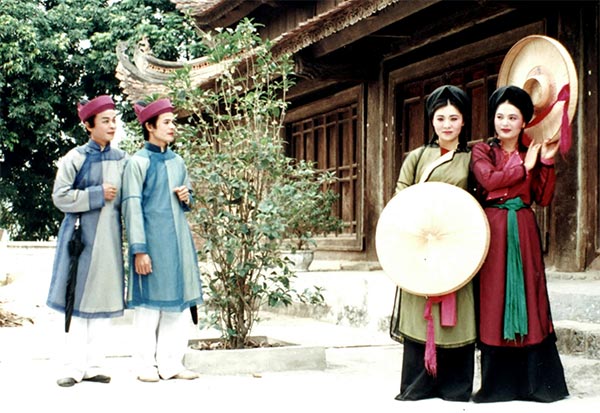 One of the old polular tales narrates as follows: Once upon a time, Lung Giang village (Liem village) and Tam Son village (Tu Son), both in Bac Ninh province, were in very good relations. Every year, on the 13th of the first lunar month, Tam Son village held a singing party at the communal house and invited five or six elderly men and five or six elderly women together with a great number of young singers of Lung Giang to come to join them. At the festival came into being a form of dialogue. Alternately, each time the young man of one of the villages had sung, the girls from the other village would reply in singing. Such singing competitions lasted all night until the morning of the following day. However, it’s asserted that only under the Ly dynasty (1009-1225) did the folk-song Quan Ho begin to develop strongly and become joyful festivals lasting as much as half a month.

Quan ho people of ancient times narrated as follows: Although their capital had been established in Thang Long, every year at springtime the Ly Kings always returned to their native locality, Kinh Bac, to hold joyful festivals. Each time, the fleet of dragon boats of the king entered Thien Duc river (or Duong river), the kindred and officials (Quan Vien Ho) of the Ly family, including children, the elderly, young men and young girl, all stood on the two banks of the royal canal which is reserved to welcome royal dragon boats. They sang hymns of praise, claping their hands and sang songs praising the king to the rhythm of the boat’s oars and to the rhythm of the castanets of the Chief Rower. The king often gave a special traditional feast, granted money, silk and opened a official sanity party who recited poems and sang. Since then on, this kind of folk-songs bears the name of Quan Ho songs, or the songs of the Officials and the Kindred.

Each year, on the 13th of the 1st lunar month, on the Lim hills or in the Lim pagoda’s park, among the blossoming peony bushes, the pilgrims come from every corner of the country and distinguished and smart young men and young girls of the region gather for sight seeing, contemplating blossoming flowers, encountering and making acquaintance with each other and listening together to recitals of songs, or sing Quan Ho songs.

Coming Lim festival in groups of young men or women, Quan Ho singers are dressed in their best clothes, men carry with them an umbrella of black silk, women a fan under a cartwheel palm-leaf hat tucked under their arms. A female group may be the first to go up to a male group and offer betel quids, thus striking up an acquaintance. A dialogue begins in the form of songs. In any event, courliness is the rule. The men call themselves “Your younger bothers” and address the women as ” Our elder sisters”; conversely, the latter call themselves “Your younger sisiters” and address the former as” Our elder brothers”. Female duets keep up the conversation by exchanging songs with male duets.

For instance, if the female group sing:

“How dare we! You elder brothers are like the moon that shines in the sky, we your younger sisters, we are but tiny lamps lighting small cottages”.

The men will answer unpretentiously: