The Most Unique Pagodas in Vietnam

Chùa Vạn Phật Quang Đại Tòng Lâm Tự (Pagoda of Ten Thousand Buddha)
The Great Pagoda is built in a very large scale, and represented the modern architecture. The Pagoda is located in Quang Phu hamlet, Tan Thanh District, Ba Ria – Vung Tau province. The Pagoda holds many records in Vietnam Book of Record: The largest Hall (2006), the most numbers of Buddha statues (2007), and the largest monolith statue of Bodhisattva Maitreya made out of granite (2007)… 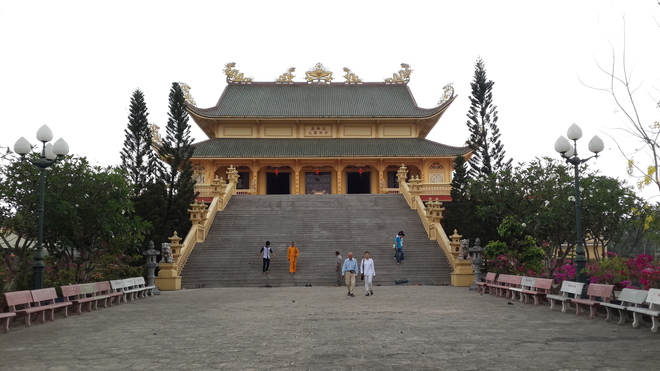 Chùa Hang (Hang Pagoda, literally The Pagoda in the Cave)
The 300-years-old pagoda is located in Ly Son island district, Quang Ngai province.  The Pagoda is famous for its picturesque scenes that mesmerized anyone who comes to the island. The formal name of the pagoda is “Thiên Khổng Thạch Tự” (Thiên means sky or God. Khổng means colossus. Thạch means Rock. Tự means words – The pagoda name is The Rock made by God). The pagoda is located in a 24m deep cave, 20m wide and 3m high with many nooks inside. 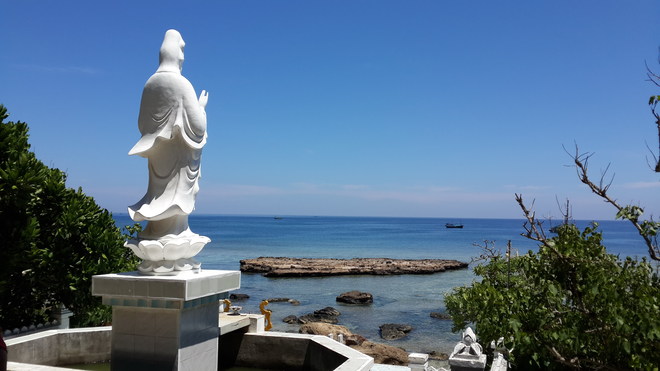 In front of the pagoda is the statue of Avalokitesvara Bodhisattva overlooking to the sea, as she always protects and bless the voyages for safe returns. 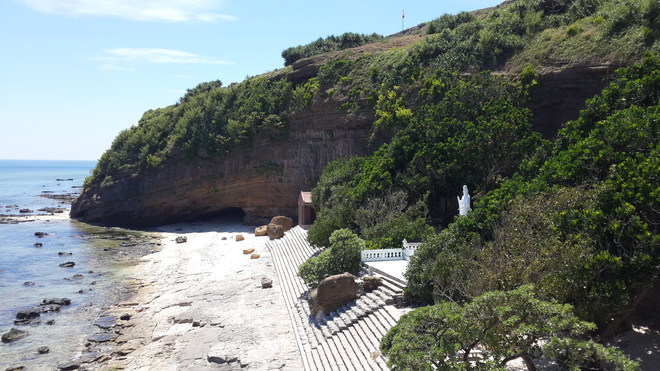 Chùa Phật Lớn (The Pagoda of Great Buddha)
The pagoda, with its full name is the Monastery of the Great Buddha, is located on Mount Thiên Cấm (Forbidden by God) 710 m above sea level, An Hao Commune, Tinh Bien district, An Giang province. 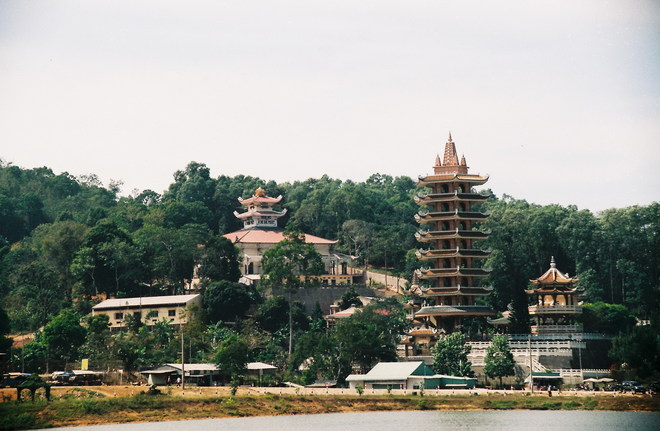 The pagoda’s many structures consist of the 34-meters-high great statue of Buddha Maitreya, who is having a calm smile with compassion and amnesty. In 2013, the Asian Record Center has recognized the statue of Maitreya Buddha is the largest statue of its kind in Asia. 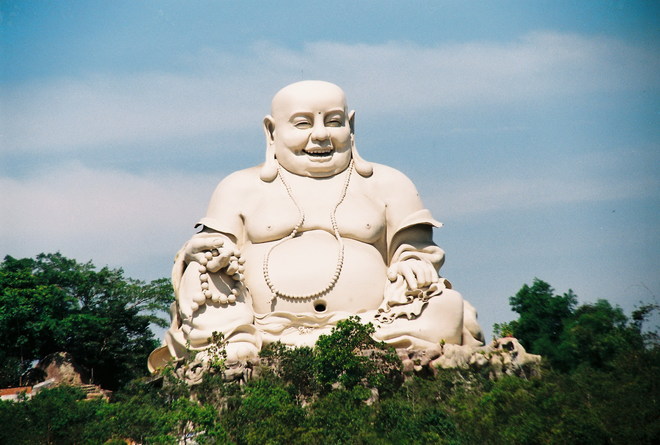 Chùa núi Châu Thới (Mountain Pagoda of Chau Thoi)
The pagoda is about 4 km away from the city of Bien Hoa (Dong Nai) and 24 km from Ho Chi Minh City. The pagoda is located in Binh An commune, Di An District, Binh Duong Province, 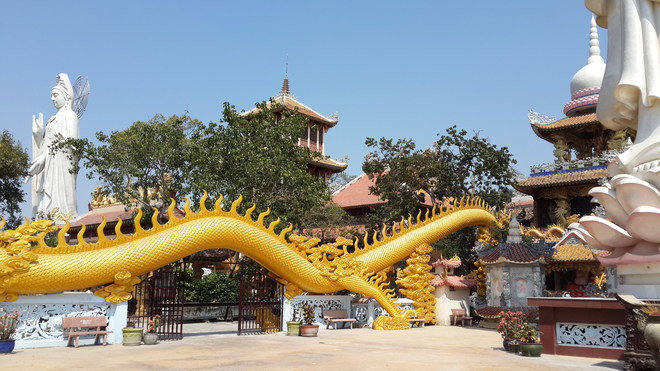 Over 300 years ago, Khanh Long, a monk who was in a missionary to the region, has found a beautiful place at the top of Mount Chau Thoi. He decided to build a small pagoda called Hoi Son pagoda, and then changed to Mount Chau Thoi Pagoda. This is the oldest pagoda in Binh Duong province

Chùa Thiên Ấn (The Seal of God Pagoda)
Thien An Pagoda is located on the holy land of Mount Thien An, at the height 100 m higher than sea level in Quang Ngai Province. From a distant view, the trapezoid-shaped pagoda looks like a seal and because the pagoda is located next to the poetic Tra river so the local people used to call the pagoda “Thiên Ấn niêm hà” (or the seal on the river.) 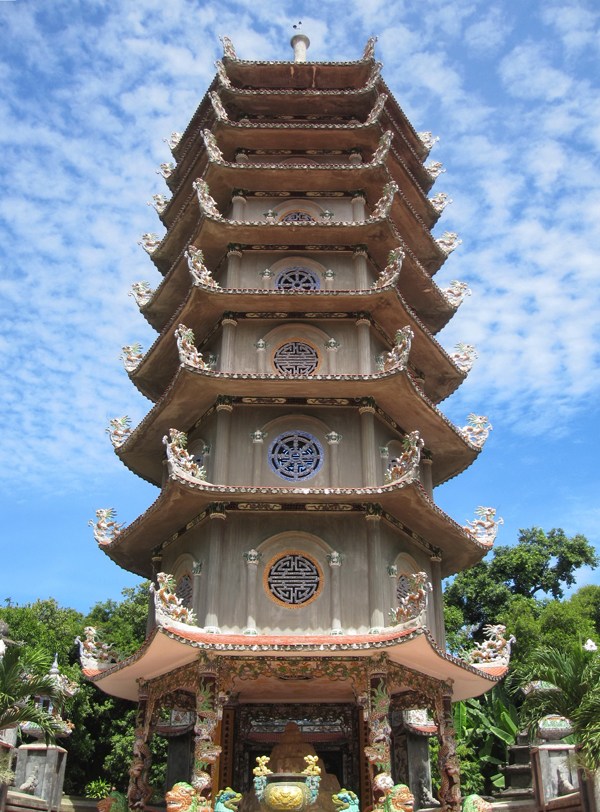 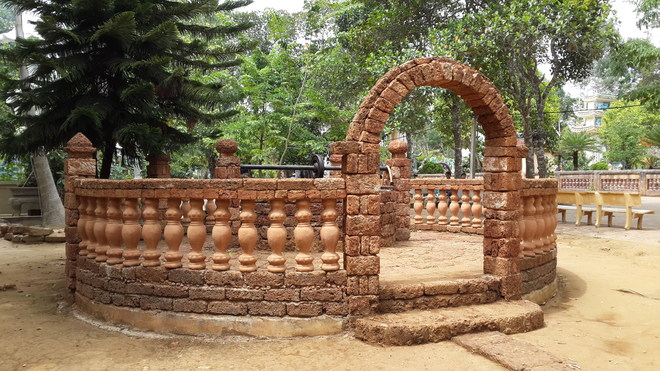 The middle of the pagoda, there is a 2-meter-deep holy well dug out the cool water from the ground. The tales and the miracles about the well are kept record in the books and in the fables of the local.