A world of diversity

Dong Van1 experience24 Northwest1
Going to a fair or carnival is a good way to learn about the culture, customs and life of the highland ethnicities. It was...

Going to a fair or carnival is a good way to learn about the culture, customs and life of the highland ethnicities. It was a fortuitous blessing that I recently had a chance to take part in this lively event put on by the 23 minority groups living on the rocky Dong Van plateau, Meo Vac, Ha Giang Province.

When the sky was still a thick grey mass, the sun was still hiding behind the mountains and the biting cold still devouring the plateau rocks, I heard the noises of people on the passes, calling and urging each other to make it to the carnival on time. 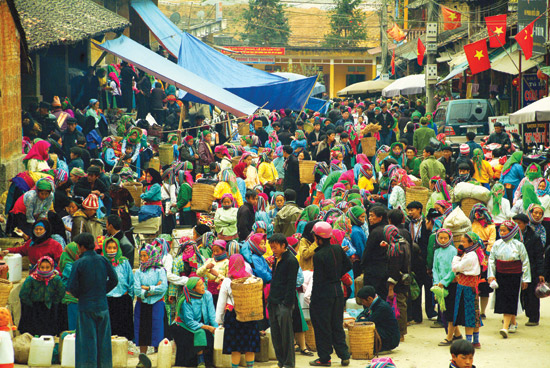 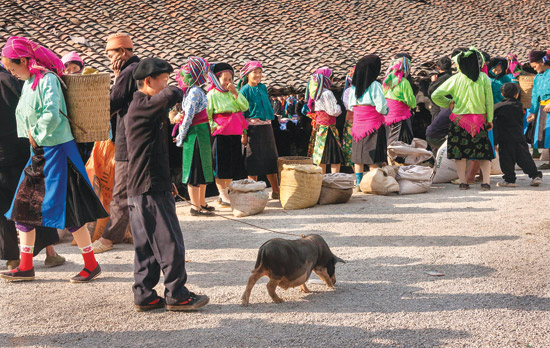 Dong Van Market.
Photos: Dang Van Tran and
Do Huu Tien
Dong Van market is very old. It’s a part of the old Dong Van town, the hub of economic and cultural trading on this plateau. This U-shaped structure, built of rocks, has long been the convergence point of the ethnic colours of the country’s northernmost land.

On gathering days, these old, normally quiet and gray streets become crowded, colourful and lively. Hmong, Dao, Tay, Giay, Nung, Lolo … folks in their traditional dresses from all directions, some from a few mountains away, pour down to town, bringing something to trade. Languages and dialects add rich flavours to the uneven rhythm of this boiling chorus of life.

The goods that change hands here are also ethnic, adding even more uniqueness to the gathering. There is produce and livestock, either made at home, or farmed or collected in the forests, such as vegetables, corn, rice, alcoholic beverages, honey, pigs, chickens, buffalos, cows and brocades. Some people bring just a very few almost worthless things, but the spirit is high nonetheless. They normally buy salt, kerosene, torchlights, blankets, and mosquito nets, things that are made in the low lands.

Down the low lands, people come to bazaars just to trade goods. Up here, the fair is also a cultural event. People come here to meet each other, to talk, to drink, to eat ‘thắng cố’ (meat soup consisting of cow, buffalo, goat, or horse innards). Here is the place for women to show off their best dresses, for men to show off with ‘khèn’ (a way of singing named after a sweet dessert.)

Hard core travellers say, ‘Not having tasted thắng cố means not knowing the highland.’ A hot bowl of thắng cố, a glass of sweet- smelling corn vodka and the tunes of Hmong khèn will bring you the feel of this rocky plateau.

According to Thanh Nien News, 27 March, 2014, Dong Van Market was relocated in 2011. The new site is a few hundreds of metres away from the old site. The relocation was necessary because the amount of sellers and buyers had increased, exceeding the market’s capacity. Also it was a must for the preservation of the ancient Dong Van Town, after the latter was recognized as a national relic site.

Particularly, during the 14th, 15th and 16th of the lunar months, many cultural activities, such as bird fights, a food fair, music, songs and dances, and traditional brocade weaving shows take place in this old town. At night, the streets are lit with red lanterns, attracting tourists to family brocade shows and old style cafés.