Chinese travellers, Ban Gioc FallsBan Gioc Waterfall is one of Vietnam’s most impressive natural sights. Located in the northeastern province of Cao Bang, the falls are 30 metres high and 300 metres across, making Ban Gioc the widest – but not the highest – waterfall in the country. The falls occur on the Quay Son River, a beautiful jade-blue body of water, flowing through a pastoral landscape of rice fields and bamboo groves, surrounded by limestone pinnacles. At Ban Gioc, the Quay Son River forms the border between Vietnam and China; consequently the falls are half in Vietnam and half in China. Both countries have bamboo rafts that punt visitors around the base of the falls for better views of the cascade; you can literally shake hands with Chinese tourists on the other rafts. Ban Gioc Waterfall is 350km from Hanoi. It’s reached via a good national highway to Cao Bang City, and then several recently upgraded provincial roads, leading through fantastic countryside to the falls. It’s now easier than ever to visit Ban Gioc, but still very few people – especially foreign travellers – make it here. A perfect destination if you’re on a motorbike road trip around northern Vietnam, or an independent traveller looking to get off the beaten track, this waterfall is a favourite destination of mine. Below is my illustrated guide to Ban Gioc Waterfall and my map of the area. 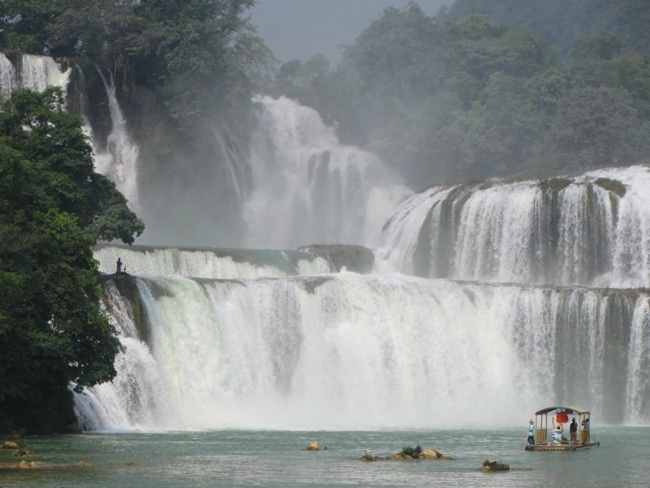 Before reaching Ban Gioc Falls, the Quay Son River ambles through a sumptuous valley, studded with limestone karsts. I warm to this gentle landscape, and it’s been one of my favourite corners of the country ever since I first visited the area in 2009. 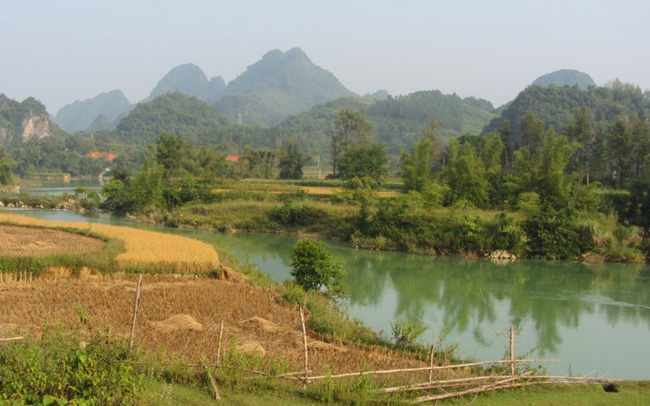 The best time to visit the falls is from September to October, when the summer rains that feed the waterfall are less frequent and harvest is in full swing. Farming techniques can’t have changed much here in centuries; save for some mechanized rice threshers, most of the work is done by hand. One piece of ‘technology’ you’ll see along the banks of the river is the bamboo water wheel. This attractive, medieval-looking device scoops up water from the river, carries it up to the level of the fields, and drops it into earth gutters, which channel the water into the fields to irrigate the crops. It’s a hypnotic, peaceful and timeless sight. 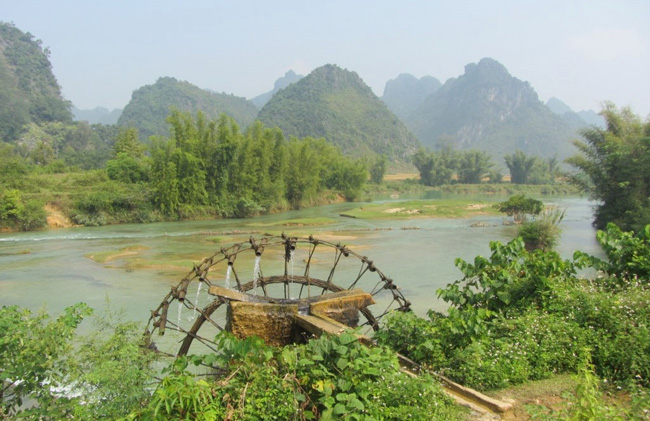 The serenity of this valley is dramatically broken when the Quay Son River reaches a 300 metre-wide limestone ledge, and drops sharply down several terraces, creating Ban Gioc Waterfall. Some brave (or foolhardy) fishermen stand in precarious positions, casting their lines into the cascade. 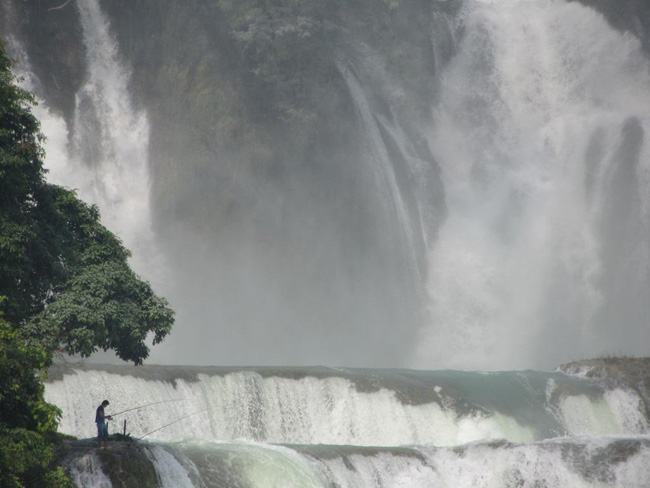 Because the falls are located right on the Chinese border, foreign travellers used to require a special permit to visit the area. But today (2014) you can just turn up and buy a ticket (20,000vnđ [$1]) at the kiosk without any documents at all, before walking down a gravel path to the waterfall. The path threads through rice fields, over wooden bridges above gurgling creeks, and onto an exposed grassy bank at the bottom of the falls. The wide, white cascade is fringed with foliage and framed by sharp tooth-like limestone mountains, which are partly obscured by drifting clouds of vapour from all the spray generated by the waterfall. 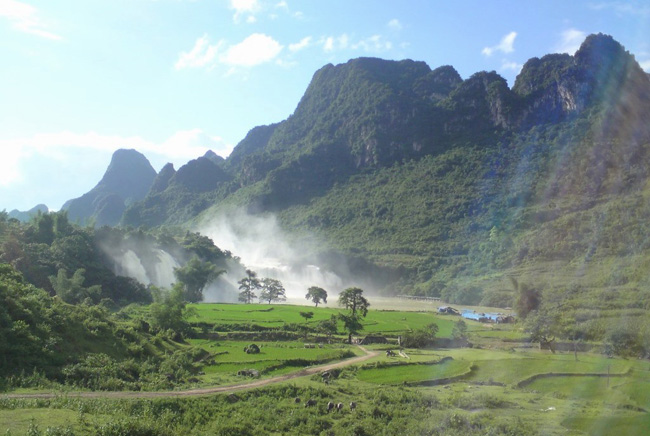 On the Chinese side of the river there’s a hotel on the hill, but the Vietnamese side has yet to see any significant development. A resort, run by Saigon Tourist, is under construction by the ticket entrance, but won’t be completed for some time. For now, the only tourist infrastructure here are a few unattractive wooden shacks covered by blue tarpaulins, selling snacks and trinkets. Almost all visitors to Ban Gioc stay in one of the dozens of good-value hotels in Cao Bang City, 90km west of the falls. However, there are two local guest houses (nhà nghỉ in Vietnamese) on either side of the road, about two kilometres before reaching the falls. Dinh Van II Hotel (Tel: 0263 602 789) and Nha Nghi Tung Duong (Tel: 0915 660 688) both offer basic but clean and inexpensive accommodation for a night at around 200-300.000vnđ ($10-15). There are also a couple of nhà nghỉ in Trung Khanh, the nearest town to Ban Gioc Falls, 25km to the west. This is a good option for intrepid travellers as Trung Khanh is a dusty, rustic border town with a wild west edge. There are several crumbling pastel-coloured shophouses and an interesting daily market with various imported goods from China. You’re guaranteed to be the only foreign traveller in town. Quang Uyen, a town halfway between Cao Bang and Ban Gioc Falls, also has a good guest house, called Duy Huong Hotel on Hoa Trung Street (Tel: 0266 266 888) for around 250,000vnđ ($12) a night. (For more about nhà nghỉ click HERE). 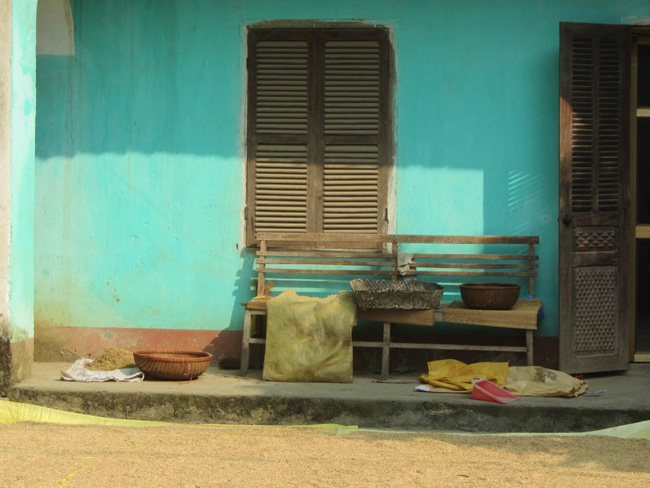 There are lots of beautiful spots around the base of the falls on which to sit and take in the spectacle. Find a place on a pebbly beach or grassy bank, perch on a boulder in a stream or lay in the curving trunk of a tropical tree, and gaze in awe at one of Vietnam’s most romantic sights. 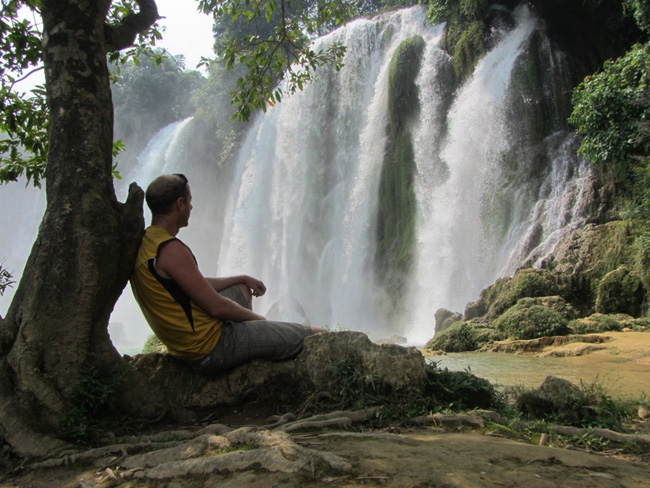 Bamboo rafts (50,000vnđ [$2.50] per person) punt visitors closer to the cascade for better views. The ‘ride’ lasts about 10 minutes and you’ll definitely get wet. In some areas signs in Vietnamese read ‘No Swimming!’ But it’s difficult to resist taking a plunge in one of the blue pools of water, especially around the smaller falls to the left of the central waterfall. There’s no one there to stop you bathing, and I’ve never encountered any resistance. But, of course, you should be very careful; stick to the placid rock pools and stay well away from the main cascade. 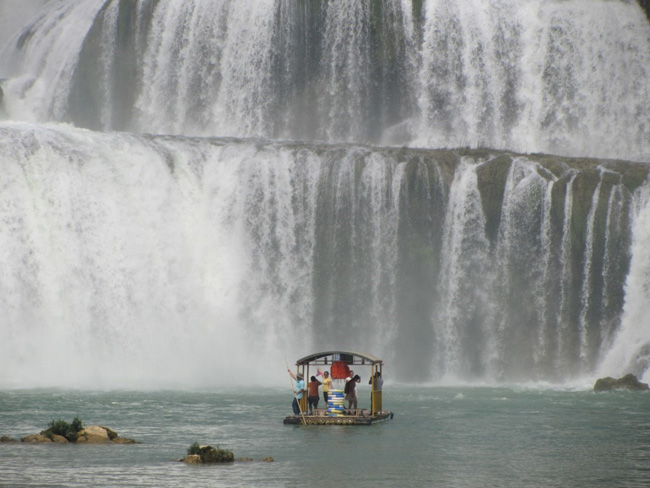 There’s a treacherous path leading up through jungle to the first and second tiers of the falls. Not for the faint-hearted – or for those without proper footwear – this track climbs steeply among vines and roots to several gorgeous pools of blue running water. Tread carefully because the rocks are slippery and soon you’ll reach the edge of a ledge, from where the water drops straight down into a giant limestone bowl below. 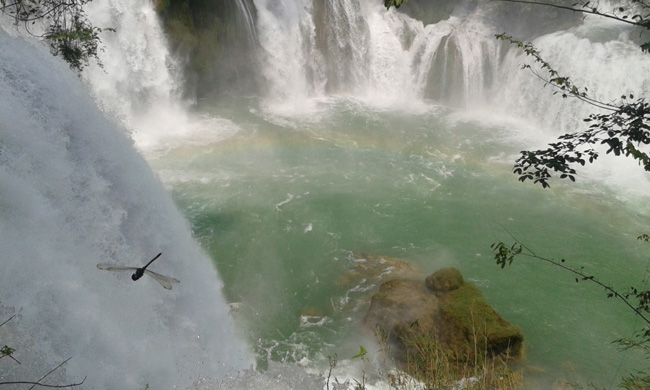 It’s possible to wander further and higher up the side of the falls for even more spectacular views of the deluge from above. It’s an ‘awesome’ sight – in the true sense of the word – but be extremely careful, and don’t even think about attempting it if it’s been raining. There are no handrails so if you slip there’s nothing to hold onto except exposed roots. You can find the start of the path behind the milestone marking the Vietnamese border, which is located over a rickety wooden bridge. 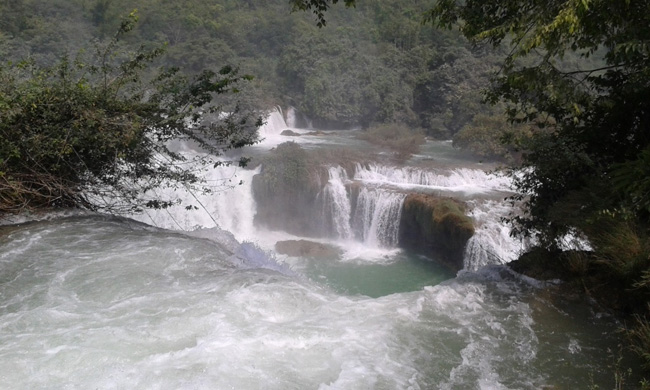 Considering the waterfall’s proximity to China – and the frosty ancient and recent history between the two countries – the atmosphere at Ban Gioc is very relaxed. Official presence on either side of the falls is minimal and, as seen in the photo below, Vietnamese floating vendors often approach Chinese rafts to sell their wares to Chinese tourists. 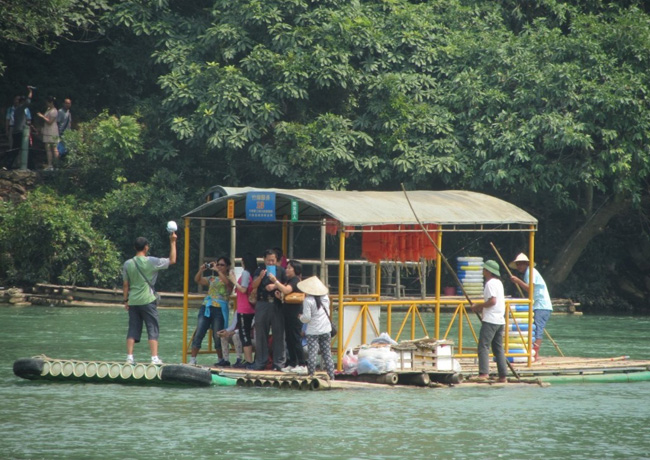 It’s easy to forget that this province was one of several points along the Vietnamese border where, in February 1979, Chinese forces entered Vietnam under the orders of Deng Xiaoping. There were many reasons for the invasion, but ultimately it was an extension of tensions between the Soviet Union and China (Vietnam having signed a treaty with the USSR in 1978). Thousands of Vietnamese and Chinese were killed and, when the Chinese army departed (or retreated, depending on whose version of events you believe), they laid waste to the land they had briefly occupied. Along the road that follows the border just beyond the falls, there are memorial shrines dedicated to local Vietnamese who died during the 1979 war. Border disputes continued into the 1980s, and included the historic Nam Quan Gate, an ancient gateway between the two countries, which ultimately ended up on the Chinese side. The photo below shows a border marker on the Vietnamese side of the Quay Son River; just 20 metres away, across the river, is China. At some points along this road, the distance between the two countries is as little as 5 metres. 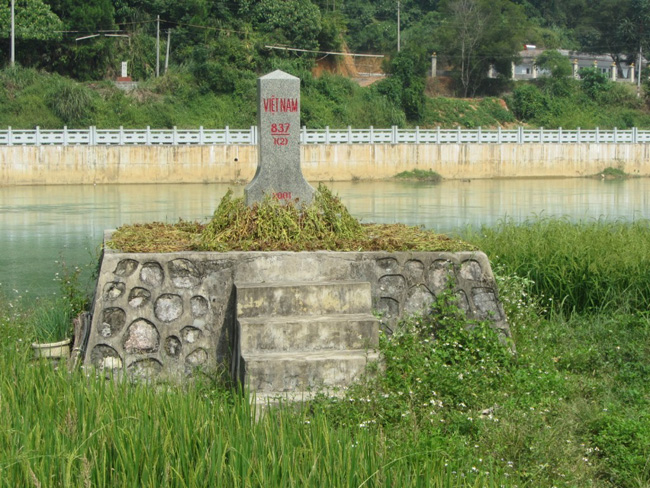 Highway QL3 from Cao Bang to Ban Gioc FallsThe easiest and most enjoyable way to reach Ban Gioc Waterfall is by motorbike, which are available for rent from some hotels and guest houses in Cao Bang City for $7-10 per day. Alternatively, many accommodations in Cao Bang can arrange a day trip to the falls. There’s an impressive limestone cave system – called Nguom Ngao Caves – just a few kilometres on the right before reaching Ban Gioc Waterfall. The caves are nicely lit, and most travellers spend a couple of hours exploring them on their way to or from Ban Gioc Falls. Getting to Cao Bang City from Hanoi is straightforward: Either take a bus from Hanoi’s My Dinh Bus Station (8 hours) or, if you have your own wheels, take Highway QL3 – which is in excellent condition for most of the way – from Hanoi to Cao Bang. From Cao Bang to the falls stay on Highway QL3 east to Quang Uyen, then turn left (due north) on Road TL206, which veers east at the town of Trung Khanh before reaching Ban Gioc Waterfall. Although there are plenty of good places to eat in Cao Bang City, food at and around the falls is not so readily available. At meal times you’ll find decent local rice eateries  in most small towns in the area, like Trung Khanh and Quang Uyen. 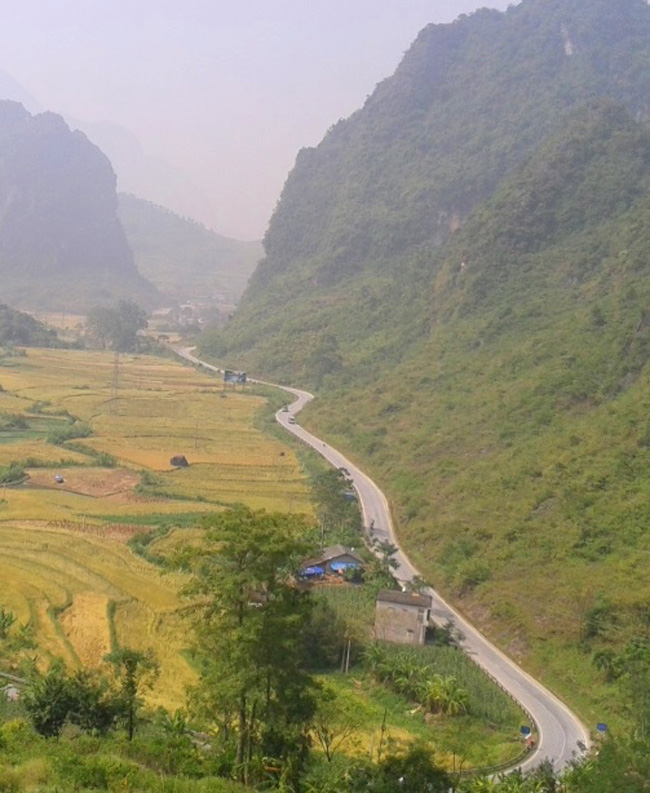